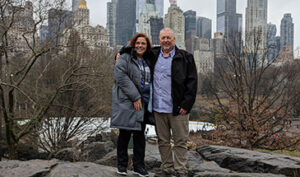 A pair of South Dakotans and their guests had a “rockin” start to 2023 thanks to a South Dakota Lottery second chance drawing.

Gabriella Anane and Connie Duvall each got to ring the new year in New York City thanks to the 2023’s First Powerball Millionaire drawing. The South Dakotans not only won an all-expenses paid trip to New York City, but they also got to experience ABC’s iconic New Year’s Rockin Eve firsthand.

“It was wonderful to experience it,” Duvall said, “We had a wonderful view from our hotel room. We could see the stage for the Dick Clark’s Rocking New Year’s Eve with Ryan Seacrest. We could see and listen to the bands warm up and practice for the evening performance.”

Connie and her husband, Gary, also made some new friends along the way. Connie noted that one of her favorite aspects of the trip were the fellow winners from across the nation.

“Gary and I are people persons. We like to visit with people. We met up with (North Dakota’s winners), Duvall said. “They were great, except Les had this idea that NDSU was going to beat SDSU in the Championship. We also meet Norman and Eloise from Omaha Nebraska. We exchanged phone numbers with them. When we drive through Omaha, we will call and get together at the Cheesecake Factory for dinner.”

While New Years Eve was very memorable, Duvall shared that the group of winners from around the country experienced much more than seeing the ball drop. She noted that they took in a lot of what the Big Apple had to offer, including the Lion King Broadway show, meeting the Rockettes and so much more.

“We also really loved going around Central Park,” Connie said. We had planned to do a carriage ride but decided to do the Pedi-cab. Our driver was wonderful! He made lots of stops to give us history of the area, let us take pictures and took some pictures of us.  We were able to see so many beautiful and iconic buildings. And took so many beautiful pictures. We walked to Rockefeller Center and took a picture of the Christmas tree.”