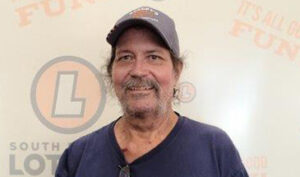 While Joel Nielsen’s circumstances during the July 23 Dakota Cash drawing weren’t ideal, that weekend was memorable in more ways than one.

The Rapid City resident became the South Dakota Lottery’s latest big winner Friday when he claimed his half of the $126,442 Dakota Cash jackpot. The other winning ticket as a result of the July drawing was purchased in Watertown.

While Nielsen’s $63,221 prize generated plenty of excitement, he didn’t learn the good news immediately. As Nielsen’s winning numbers were drawn, he was in a hospital recuperating from surgery.

“On the 22nd of July, I was in surgery for a liver transplant,” Nielsen said. “I didn’t bother checking my ticket because I was so out of it.”

Nielsen is thankfully recovering well from that surgery. His recovery and his prize have combined to give him a new outlook.

“I got really sick with my liver, but I continued to play,” Nielsen said. “The days were long and hard, but now I have a whole new life in front me.”

The expression that “good things come to those who wait” rang true for Nielsen. He notes that he eventually checked his tickets at the beginning of August and was soon met with disbelief.

“I put my phone down, said a few prayers and pinched myself,” Nielsen said. “I thought it might to be the winner, but then I remembered I’ve always had the Lottery app on my phone. I scanned the ticket, and it said it was a big winner. Then I searched the Internet, and the Mitchell newspaper had a writeup. It said two people won it and named the stores they were bought. I knew it was me.”

As Nielsen recovers, he is hoping to spend some of his prize on a new set of golf clubs and a 60th birthday fly fishing trip in Wyoming. He also aims to give back to his community through a very worthy cause.

“There are some charitable things I might give to. My son is a veteran, and there is a good program in Rapid City that helps veterans who are having trouble coping or getting back into the domestic parts of their lives,” Nielsen said.

Nielsen purchased his tickets at Maverik, Inc., located at 1624 Haines Ave. in Rapid City. He typically purchases his tickets at the retail location, and he can’t wait to make his return.

“I usually go to the same store because I’ve had really good luck with the scratchers there too,” Nielsen said. “I haven’t been back to the store, but I remember the clerk who sold me the ticket. A little tip for the clerk wouldn’t hurt.”

Nielsen notes that the $63,221 prize is the largest he has won in South Dakota or his previous homes of California, Arizona and Wyoming. He notes that South Dakota’s exclusive draw game, Dakota Cash, appeals most to him and also left some parting advice for his fellow players.

“Just be responsible. Don’t go crazy or spend your life savings,” Nielsen said. “I like to play the games with better odds. Dakota Cash is perfect. You also have to picture yourself winning. I have a strong spiritual connection and I’ve said a lot of prayer recently. I’m sure he had something to do with this.”