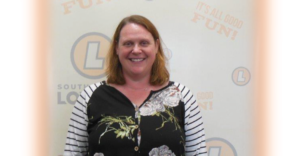 Thanks to a second chance drawing, two South Dakotans will ring in the New Year at Times Square, while one also has the chance to return as 2023’s First Powerball Millionaire.

Gabriella Anane of Sioux Falls and Connie Duvall of Aberdeen were South Dakota’s winners of the 2023’s First Powerball Millionaire promotion. Anane and Duvall each won an all-expenses paid trip to New York City for themselves and a guest by entering their non-winning Powerball tickets into the South Dakota Lottery’s second chance drawing.

“I was shocked. Very shocked,” Duvall said. “It still kind of hasn’t sunk in that we actually won.”

Ringing in the New Year at Times Square is just the tip of the iceberg for Anane. As South Dakota’s grand prize winner, she will be one of 29 players entered into a nationwide drawing to determine 2023’s First Powerball Millionaire. The drawing will be a part of ABC’s New Year’s Rockin Eve telecast.

“I haven’t really thought about the chance of me being a millionaire,” Anane said. “I consider this trip a win. But it would be a life changer if my family does win the $1 million dollar prize.”

While Anane is excited about the prospect of returning to South Dakota as a millionaire, she did note that she and her sister have big plans for the trip. She hasn’t been to New York since 2006, which further fuels the anticipation.

“I’m excited to have some adult time, go out and enjoy the city and the possibility of winning $1 million,” Anane said.

Duvall noted that she hasn’t been to New York City outside of a quick layover at an airport. With her husband’s upcoming retirement in December, she notes that a trip to New York City is the perfect way to start their new lives.

“Being in New York City is the biggest thing,” Duvall said. “We’ve always wanted to visit it. We flew to LaGuardia one time, and we could see the Statue of Liberty and the Freedom Tower from the plane. It was kind of cool to see some of that. We always thought it be fun to see some of the sites.”

While the Big Apple always has plenty of sites and scenes, South Dakota’s winners will get to experience the iconic New Years Eve experience. Being able to witness the ball drop to ring in the New Year will only add to the experience.

“My husband and I have always watched the ball drop with our glass of champagne at midnight,” Duvall said. “It’s just kind of our tradition. This is also my daughter’s dream vacation, so she might be a little upset with us when we tell her that we won the trip and get to do what she wants to do.”

Both players entered their non-winning tickets into a second chance drawing, which are exclusive to South Dakota Lottery Players Club members. The Players Club is free to join.